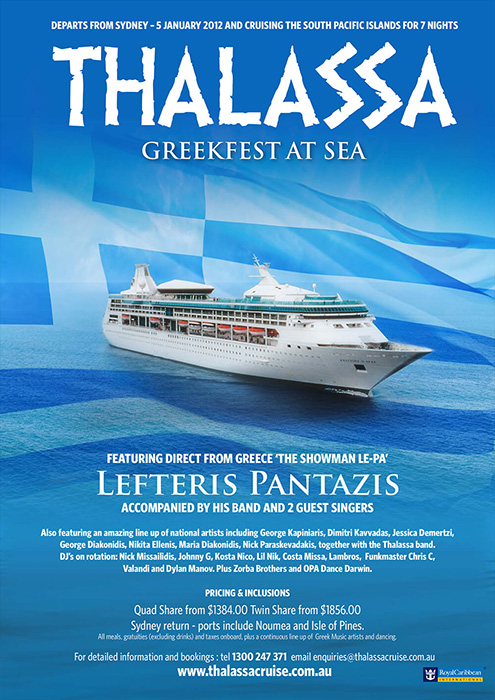 About Thalassa Greekfest at Sea

Sailing from Sydney, “Thalassa – Greek Fest at Sea” enjoyed 7 glorious nights of music and entertainment onboard the luxurious Rhapsody of the Seas. Known as the ‘Ship Of Light’, Rhapsody is sleek and modern with a warm atmosphere throughout its 11 decks of entertainment.

With breathtaking views aboard the luxurious Rhapsody of the Seas whilst cruising the South Pacific Seas for 7 glorious nights. Thalassa showcased the best in live Greek entertainment and experienced first-hand Greek music and culture at its best.

This specialty cruise featured a continuous line up of national and international Greek artists including Greece’s highly acclaimed and number one showman, Lefteris Pantazis with his band and 2 guest singers for 3 live shows! Otherwise known as Greece’s “Phenomenon of the Night” and nicknamed ‘Le-Pa’, Lefteris Pantazis performed all of his greatest hits from his gold and platinum albums.
The line-up continued with the best national Greek artists from Australia wide, performing in amazing on-board venues which include, the majestic Broadway Melodies Theatre, The Shall We Dance Lounge, The Viking Crown Lounge, The Showboat Lounge and The Schooner Bar. Featuring singers Dimitri Kavvadas, Jessica Demertzi, George Diakonidis, Nikita Ellenis and Maria Diakondis. On bouzouki, Nick Paraskevadakis playing alongside the Thalassa Band with composer Andrew Koikas. Also featuring Australia’s best stand-up comedian and entertainer, star of film, TV and radio, the man himself, Mr. George Kapiniaris

Thalassa sailed on January 2012 on board the luxurious Rhapsody of the Seas and cruised the South Pacific Ocean for 7 days and nights returning to port on 12 January 2012.