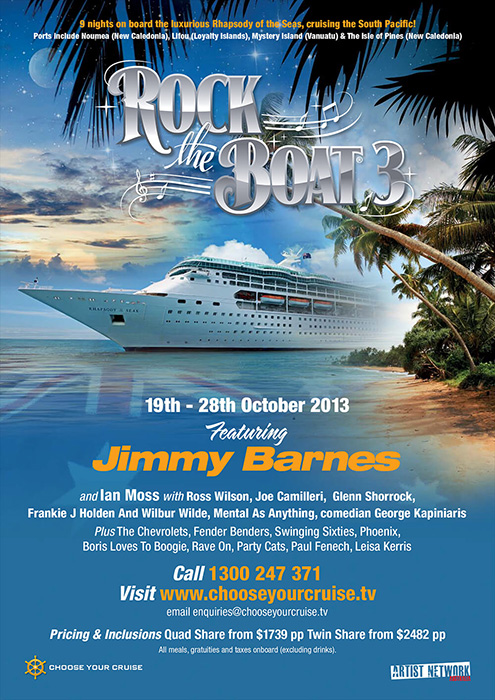 Sailing from Sydney, Rock The Boat 2013 enjoyed 9 glorious nights of music and entertainment on board the luxurious Rhapsody of the Seas.

Legendary Australian rockers Jimmy Barnes, Ian Moss and Ross Wilson headlined Rock The Boat 3 cruise in 2013. This was the third voyage of its kind which featured one of the biggest line ups of Australian rock legends ever assembled on water.

Taking to the ocean October 19-28, 2013 on board the Rhapsody Of The Seas, Rock The Boat 2013 took music fans and cruisers on a nine-night round trip from Sydney to the South Pacific, calling at Noumea, Lifou, Mystery Island and The Isle of Pines.

Jimmy Barnes said, “Translating my live show from the road to the ocean was one of the most fun things I’ve ever done. Rock The Boat gives fans the rock and roll they deserve and I’m proud to be playing a part in that experience”.

Adding to the non-stop music experience, guests also enjoyed all of the amenities and facilities aboard the Rhapsody Of The Seas, which earlier before sailing underwent an extensive multi-million-dollar refurbishment that saw a host of new dining options and technology enhancements, completely refreshed staterooms and numerous other features.