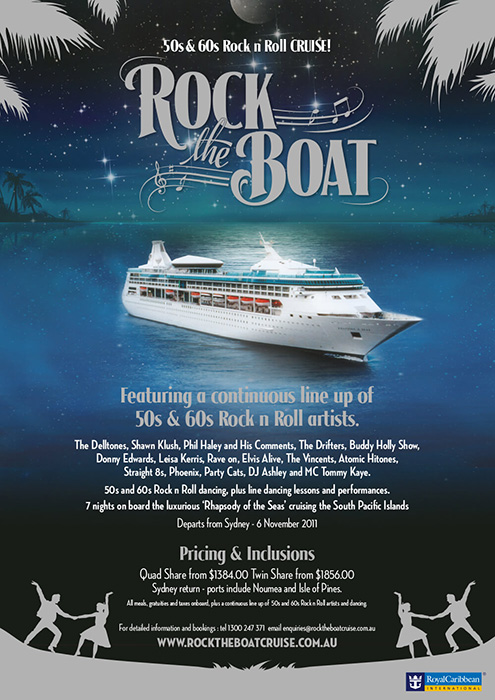 Sailing from Sydney, Rock The Boat 1 enjoyed 7 glorious nights of music and entertainment on board the luxurious Rhapsody of the Seas.

Rock the Boat featured an amazing collection of 50s and 60s Rock n Roll artists. Passengers on board were able to take a step back in time and enjoy the sights, the sounds and the dances of the Fabulous 50’s and the Swinging 60’s aboard Royal Caribbean’s Rhapsody of the Seas.

Featuring The Delltones, Billy Washington’s Drifters, Shawn Klush, Donny Edwards, Elvis Presley’s own backing singers The Sweet Inspirations, plus Dean Vegas & Paul Fenech along with Phil Haley and His Comments, the Buddy Holly Show, Leisa Kerris, Rave On, The Vincents, Atomic Hi-Tones, Straight8s, and The Party Cats, this was the first cruise of its kind which has now broadened into a highly successful brand of music festival on the high seas for Choose Your Cruise.

Shows were held in the amazing on-board venues including the majestic Broadway Melodies Theater, Shall We Dance Lounge, Viking Crown Lounge, Showboat Lounge and the Schooner Bar & Poolside. Passengers were able to sit back and relax while watching breathtaking live performances, or put on your Rock n Roll dancing shoes at the 50s and 60s Rock n Roll dance lessons. Held daily by our resident instructors, Rock the Boat also featured dancing showcases held every night.

Passengers aboard the music festival on the high seas also enjoyed the tropical beauty of the South Pacific for seven nights, visiting ports of call in Noumea, a French Caledonian gem of the South Pacific and The Isle Of Pines, known for its azure lagoons, untouched white sand and underwater wonders which have earned it the nickname ‘l’île la plus proche du paradis’, the closest island to paradise.