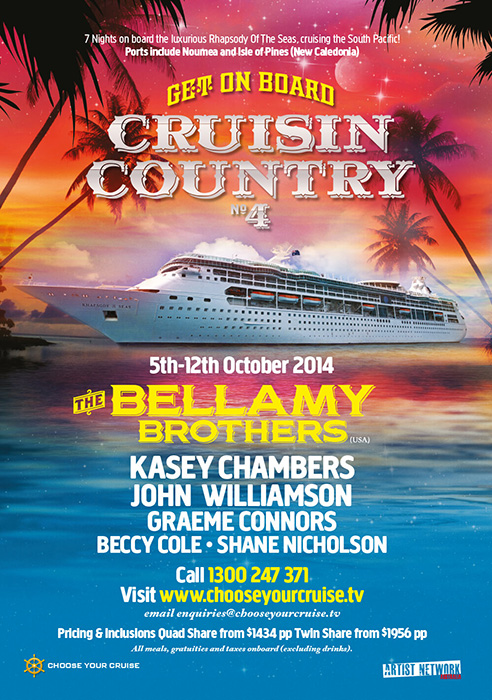 Sailing from Sydney, Cruisin Country 2014 enjoyed 7 glorious nights of music and entertainment on board the luxurious Rhapsody of the Seas in 2014.

The fourth annual country music festival at sea featured US country duo Bellamy Brothers with John Williamson, Graeme Connors, Kasey Chambers, Shane Nicholson, Beccy Cole, and many more.
Multi-platinum selling duo Bellamy Brothers took Cruisin’ Country fans on the cruise of their life! With fourteen #1 songs throughout their 35+ year career and with hits like “Let Your Love Flow,” “If I Said You Had A Beautiful Body (Would You Hold It Against Me),” “Redneck Girl,” and “Old Hippie”, the brothers will be bought their seamless harmonies to Cruisin’ Country 2014.

Music played from morning until late into the night, and there were plenty of opportunities for country fans to participate in our exclusive song writing and guitar workshops, dance lessons from beginner to advanced level, and “open mic” sessions where they demonstrated their own musical talents in front of special guest judges. In addition, guests explored the beautiful South Pacific destinations of Noumea and the Isle of Pines, whilst enjoying all of the amenities and facilities aboard the Rhapsody Of The Seas.