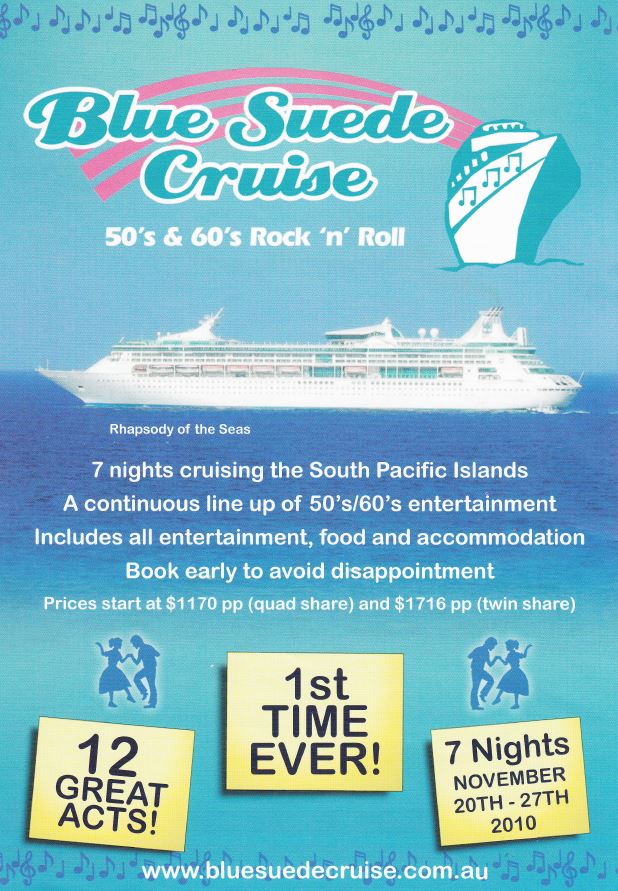 Headlined by Elvis to the Max (USA), Jade Hurley, The Chevrolets, Darryl Cotton, the Fabulous Singlettes and many more made for a fun filled 7 night 50’s & 60’s Rock ‘n’ Roll experience around the Pacific.

Known as the ‘ship of light’, Rhapsody is sleek and modern with a warm atmosphere throughout its 11 decks of entertainment. Warm woods, sun-filled atriums, marble staircases and buttery leathers all help contribute to a feeling of relaxed elegance.

Passengers also enjoyed the tropical beauty of the South Pacific for seven nights, visiting ports of call in Noumea, a French Caledonian gem of the South Pacific and The Isle Of Pines, known for its azure lagoons, untouched white sand and underwater wonders which have earned it the nickname ‘l’île la plus proche du paradis’, the closest island to paradise.

This was the very first cruise launched by Choose Your Cruise founder, Mick Manov – who had a dream to bring his two passions in life, music and cruising together and indeed made them a reality. Blue Suede Cruise gained traction quickly within Rock N Roll dancing communities around Australia who had never had a holiday opportunity like this before. The cruise was a great success, which sold out months prior to it’s sailing date and to this day proves itself as a crowd favorite. This cruise was the very beginning of a wonderful journey of music and cruising that over 40,000 passengers have since enjoyed, and continues to be an integral part of Australian festival culture.