Greg Agar, Hugh Murray and Murray Sheridan are the Stomping Ivories. Now touring the world with two grand pianos and a drum kit!

The vocal trio swerves off a seemingly spontaneous hit list of over 350 songs from Gershwin to Gaga. It’s a hit concept sparked from the piano halls of New Orleans but organically infused with hundreds of performances across the back roads of Australia and now to rave reviews in Europe. With rock’n’roll swagger they deftly weave the hits songs of all eras, turning big rooms into intimate spaces where audiences can’t help but sing along. As at ease with the honky tonk of Elton John, the rock of AC/DC or Queen, Mancini to Madonna or the swinging’ class of Frank Sinatra and Ella the roguish spontaneity is a guarantee for one off memorable moments every night they step on stage.

With song-writing credits alongside Keith Urban, INXS and USA soul legend Lou Rawls, Hugh has songs on albums near one million sales. Greg and Murray have entered the Stomping fray, with a recent national Aria award as producer and engineer respectively. None other than Al Pacino chose a song co-written by Greg to sing and act out on film as the lead track in his latest Hollywood film ‘Danny Collins’.

Stomping Ivories are not only renowned around Australia and venues across the world, they are also veterans of our stages. Having performed on Rock the Boat, Cruise N Groove, Cruisin’ Country and BRAVO Cruise of Performing Arts both in Australia and in the UK, we love having these guys on board as much as our passengers do! In 2021, you can see them on board Rock the Boat for Super Cruise 2021 departing Sydney November 23-30, For more information call Choose Your Cruise on 1300 247 371.

Check out this video recorded by one of our passengers on board Cruisin’ Country 2017 of Stomping Ivories performing with The Toombs Brothers in one of our infamous Schooner Bar Sessions:

I am the Project Manager for Choose Your Cruise, and have been working for CYC since 2011! I have since had over 200 days at sea and love working in such a diverse work environment that combines music and travel. I also love to write, and you may even catch me around the ship interviewing some of your favourite acts on board. If you have a question you would like me to ask them, you can email me caitlin@chooseyourcruise.tv for the hard hitting questions!! 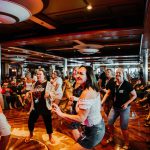 TIP: HOW TO ACCESS THE STREAM Step by Step guide (accessing the stream via...